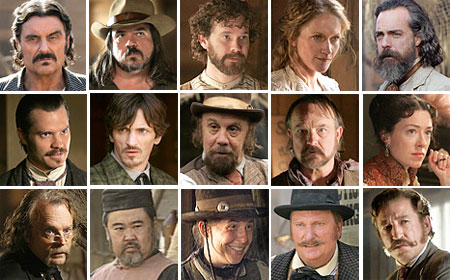 Travis and I finished the third season of Deadwood on Sunday. I cannot fully express how much I loved this series other than by saying that it almost knocked Star Trek: The Next Generation out of the top spot on my list of favorite television programs of all time. Almost. Next Generation still holds the title of my favorite show, but Deadwood comes in a close second (knocking Arrested Development to third).

Deadwood was just an intelligent show. It was about courage, and community, and will, and sacrifice, and most of all about good people who sometimes had to do bad things. Well, maybe slightly more often than sometimes… I loved following the power struggles and shifts and I liked how real and dirty the series was. I was gearing up for a major shoot-out/gunfight for the finale episode, but since the show is loosely based on the real history of Deadwood, South Dakota, there were only so many people who could end up dead. Even without the shootout, I was satisfied with the simple fact that Al Swearengen was willing to sacrifice himself for his community and that his friends rallied around him. Hmmm… reminds me a bit of Harry Potter….

And to prove that TNG can still hold its own, here’s a little something fun for your enjoyment:

5 Replies to “Deadwood, I love you”