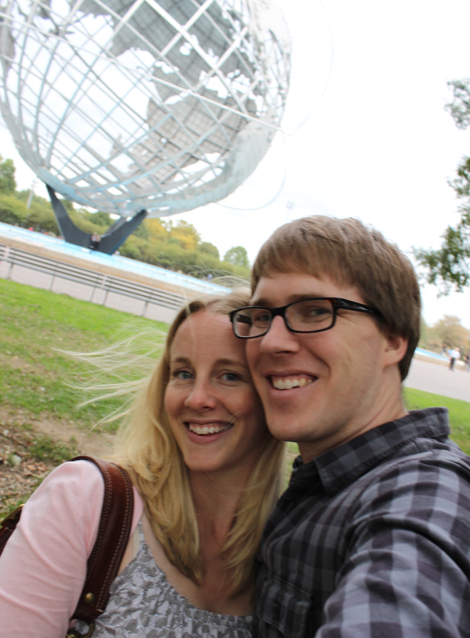 Travis and I traveled to Queens yesterday for the Makers Faire in Flushing Meadows-Corona Park. I am working on a full article about the Faire for CraftCritique.com – so stay tuned for that! – but I was completely fascinated by the park in general and felt compelled to do some research when we got home.

Queens is the second most populated NYC borough (after Brooklyn) and it is the most diverse county in the entire country. Nearly half of Queens residents are foreign born and over 130 different languages are spoken in the borough. Pretty amazing! The 7 line of the NY subway system has been deemed the “International Express,” a national living heritage trail recognized for its importance to American immigrant history. I wish I could say we took the 7 out to Queens, but instead we hired a car…

Flushing Meadows-Corona Park was the site of the 1939-40 and 1964-65 New York World’s Fairs, previous to which it was a dumping ground for ashes. I am so fascinated by the World’s Fairs. It just seems so crazy that these entire huge complexes were created and now there is almost nothing left…

The 1964 NY World’s Fair had the theme “Peace through Understanding” and it was dedicated to “Man’s Achievement on a Shrinking Globe in an Expanding Universe” – very Space Age. (NASA and the Department of Defense both sponsored exhibits.) You can view original photos of many of the Fair exhibits in this postcard collection, like the Tower of Light and the The Plaza of Astronauts. All of the exhibits seem so optimistic and triumphant – and they REALLY liked utilizing the wondrous material of concrete! 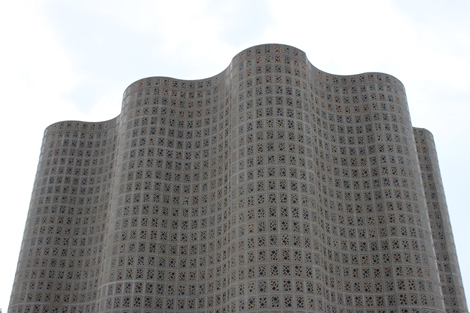 The Unisphere (the world’s largest global structure, rising 140 feet and weighing 700,000 pounds) is the most recognizable relic of the Fair, but a few other structures remain. The Queens Museum of Art, The Hall Of Science (seen above), the super-weird Terrace on the Park, which was the Fair’s helipad, and the Queens Theater in the Park are all structures built for the fair that are still in use today. 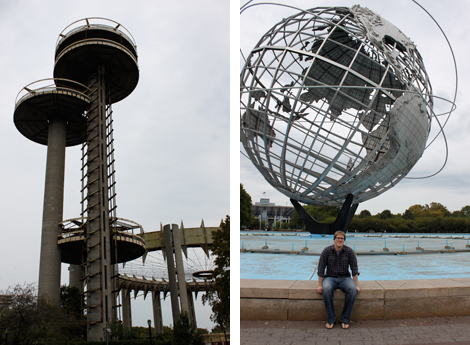 In my opinion, the most interesting remnant from the NY World’s Fair is the now derelict NY State Pavilion (seen in the left hand photo above, and in its original state in the postcard below). The NY State Pavilion — or the “Tent of Tomorrow” — was the largest exhibit in the Fair. It was designed by famed modernist architect Philip Johnson, sponsored by Texaco, and decorated by relatively unknown artists of the time, including Robert Indiana, Ellsworth Kelly, Roy Lichtenstein, Robert Rauschenberg, James Rosenquist, and Andy Warhol!! It contained three separate structures, a fiberglass covered pavilion with a tiled state map of NY (which is said to have cost one million dollars at the time!), three observation towers with elevators, and a circular theater (now the home of the Theater in the Park). 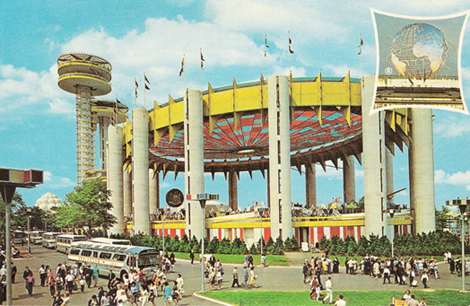 The pavilion area and the observation towers have been left to deteriorate for the past 50 years and the result is a strange and eerie structure that could be used in a movie about the desolate, dystopian wasteland of the future. I wish I could get in them and explore! It just seems so incredibly sad to me that these structures were the best and most innovative creations of their time and now they are abandoned and forgotten. I wish I could travel back in time just to see what the World’s Fairs were like… of course, I shouldn’t romanticize history too much. I have been to Epcot in Orlando, and I assume that it is similar to the World’s Fairs — full cultures and societies condensed into happy, cheery, stereotyped exhibits.

Queens is such a culturally rich and historically interesting place — I wish more could be done to tell its story! I definitely plan to explore it more and at least check out the Queens Museum of Art. What else should I add to my Queens Site Seeing List?

8 Replies to “Queens & the World’s Fair”