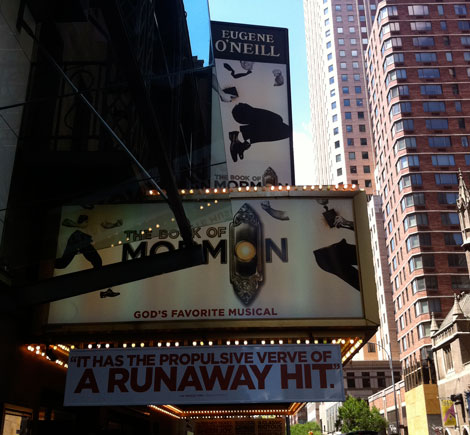 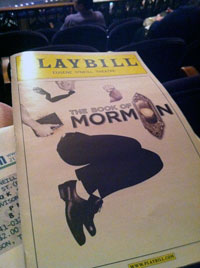 Some things about me: I am not that into live theater. Live singing and acting make me really nervous, mostly because I am so incredibly terrible at both that I transfer my own fears of embarrassment onto the performers. This nervousness is basically the reason why “The Book of Mormon” was my very first Broadway show experience. Also, I am fascinated by religion, so this was the first musical that I felt I HAD to see.

“The Book of Mormon” was written by Trey Parker and Matt Stone, the guys behind “South Park.” It has gotten impeccable reviews. I appreciate “South Park.” It is genius and hilarious, which I love, but it is also crude and vulgar. Some of that same shock-value humor is used in “The Book of Mormon.” I think that everyone who goes to the show will be expecting it, but if you’ve never seen “South Park,” the strong language used in the musical might offend… not that it should. It is all hilarious and true. And we are all adults, right?

With the disclaimer about “adult” language out of the way, I can get on to the love fest… What a fun, happy, adorable, smart, life-affirming show!! Even Mormons are finding the show “surprisingly sweet.” It is about two Mormon missionaries who are assigned to Uganda and the challenges they face in such an unfamiliar place. It is also about how humans and religion are flawed and funny and ridiculous, but that doesn’t mean we should stop trying to do good. We can have hope and faith in goodness, even if the details of religion are a little weird.

Parker and Stone describe “The Book of Mormon” as an “atheist love letter to religion.” That is a perfect description. I am not an atheist. I sort of consider myself pan-religious — open to all, devout to none — and “The Book of Mormon” affirmed my personal philosophies. So much so that I cried at the end. Not because the story is THAT touching, but because it felt so good to know that there are other people out there who are thinking the same things I am.

If you want a taste of “The Book of Mormon,” you can listen to all of the songs from the show here on NPR. (Remember, I warned you about the language.)