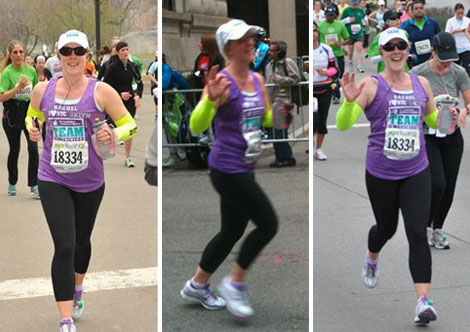 A lot has happened in the past few weeks that I would love to write about, but right now the NYC Half Marathon is on my mind. Travis and I ran the 13.1 mile race through NYC yesterday, starting in Central Park, cutting through Times Square, running along the Hudson River, through the Battery Tunnel, and then ending at South Street Seaport. I’d been looking forward to running this race ever since cheering for it last year. I pushed it hard, trying for a fairly agressive time goal… and I am happy to say that I made it! I ran my fastest half marathon of my adult life – 2:15:16 – faster than my previous best, 2:16 at Staten Island in 2010. (I ran one faster when I was 19 – in 2000! – but I’m not counting it right now.) 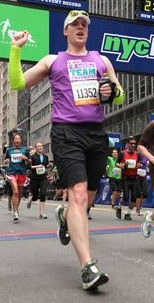 It was a fun day. Our Team in Training coaches were on the course and our friends were out cheering. (My friend, Kat Lee, took the middle photo as I ran by near mile 13, and my friend, Kenny Komala, took the photo on the right at about mile 10.) I started out a little faster than I had planned (not smart) and had a few aches and pains, but still managed to achieve negative splits, with my last miles being the fastest. My mantra was “just see what you can do.” I listened to music, which I think kept me focused. I was totally spent by the end, and couldn’t even sprint in the last 200 meters. It was a relief to cross the finish line. Travis reached his time goal also (much faster than mine) and set a true Personal Record. I found him and my friends, Lauren and Sarah, at the finishers’ village and we stood in line for Meb Keflezighi’s signature! (He is my favorite endurance athlete.)

Reaching my time goal is exciting, but man, I am paying for it today! I am nearly as sore as I was after the full marathon in October! But despite the pain, I am already working on my race plan and goals for the next event. I want to beat my teenage PR!!