Trying out the #Vine video app on my sleepy puppy. vine.co/v/bJ1xE2XgePa

They’ve been telling us that video is the next big thing on the web for a decade… and obviously it IS a major part of the online world. (YouTube was the third most visited site in 2012.) But I am still skeptical. I hate the long load times, the 30 second ads you have to watch before getting to your content, and the long length of the videos. My time online is spent so frantically — always something to do, always new links to click — that I rarely take the time to watch video.

So… what am I doing using the video app, Vine?? 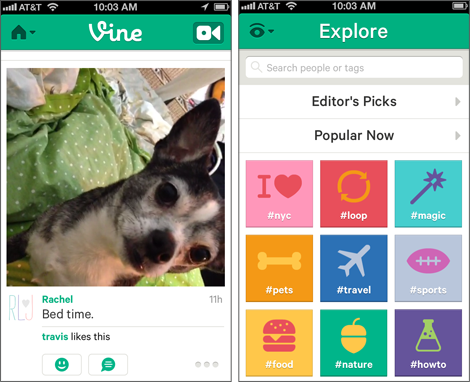 Vine is a free, cute, little iPhone app that allows you to take tiny, 6-second videos and share them online. It’s format and usability is similar to Instagram, so it is easy to dive right in. A few of my favorite bloggers have been buzzing about the Twitter-owned app since it was officially released last week, so I had to give it a try!

So far, I think I’ve made seven vines, but my favorites are:

Vine Positives: It is free! No ads! (yet.) I LOVE the short format. Six-second videos are just my style! The app is easy to figure out and use. The videos are easy to browse on your phone — they load and play immediately — and give a fun glimpse into the lives of your favorite bloggers and Twitter-ers. Many users have already mastered the stop-action format and have posted some amazing stuff.

Have you tried Vine? What do you think? Please link to your Vine videos in the comments! 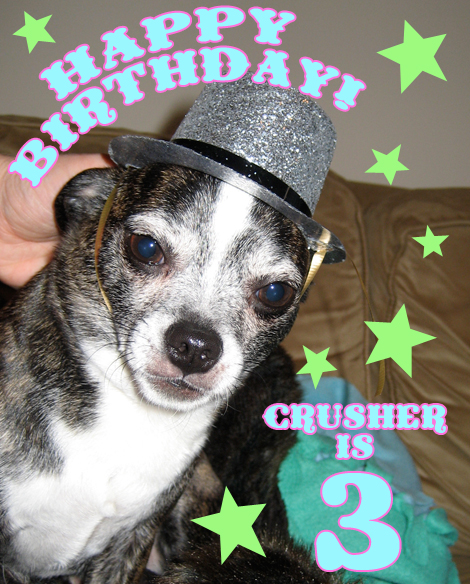 My sweet, little puppy turns three years old today! We aren’t having much of a party, but he is getting plenty of treats.

Crusher has a strong personality – independent and demanding – but he is a great part of our family. He always wants to sit right between Travis and me on the couch and will only sleep if he can have the middle spot in the bed. He sits right beside me while I work at the computer each day and he knows when Travis gets home. He goes out to the living room each night to wait for him at six pm and does a squealing dance when Travis walks in the door. He loves it when we go out in the neighborhood to hunt for food (i.e. buy it at a shop while he waits outside) and proudly escorts our score back to our apartment with a little prance in his step. He takes his job as the protector of our apartment very seriously and he always wants to be a part of whatever Travis and I are doing. (Unless it involves wearing miniature top hats.) Basically, he is the best dog in the world. 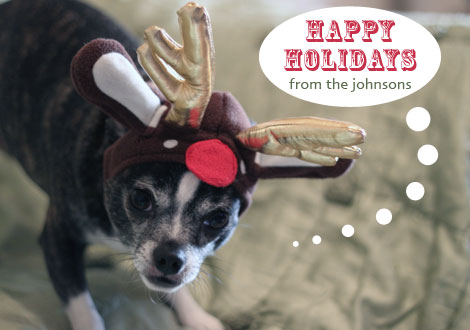 Love cupcakes, but hate the calories? Me too, so I was tickled to discover a new (calorie-free) iPhone app all about cupcakes.

My real life cupcake love has been on the back-burner recently. I just haven’t been able to bring myself to eat mounds and mounds of cupcakes – weird, I know – but I think I got a little burnt out from doing my previous reviews. It is sad. Which is why virtual cupcakes are so appealing!

The app is called Cupcakes! It costs $.99, and even though I don’t usually spend money on apps, I thought this one was worth checking out. I’m glad I did!

The app allows you to create adorable, detailed, virtual cupcakes. You choose the cupcake liner, the batter, the frosting, and the toppings. Then, you bake them, add candles, and “eat” them. There are nearly infinite flavor and topping choices, and you can save your creations in your “refrigerator” or save them as images to share on the web (like the ones above). It may sound silly, but the app is a fun and creative way to occupy your time, like when you are on the subway. You don’t need wifi or a cell connection to play. It is a cute alternative to the same old iPhone games.

I like making cupcakes so much that I bought the Cupcakes! Holiday Edition app, too, and I am thinking about getting the Sundaes version.

(And no, I was not paid for this review, I just really like the app!) 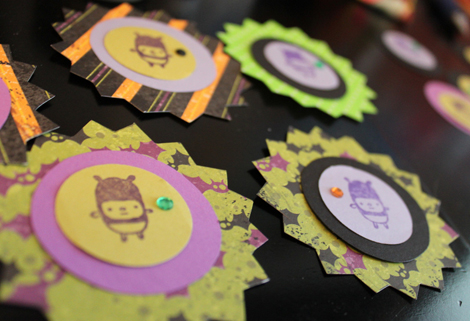 My life does consist of things other than running — mostly answering email — but also a little bit of crafting. I don’t join a ton of craft swaps lately because of my time constraints, but I couldn’t resist the Halloween Cupcake Toppers Swap. My toppers are two-sided, with this little cutie on one side and mini Frankenstein (‘s monster) on the other. It is fun to fit in a little bit of Halloween creativity… What have you been making for Halloween?

I am not a religious person, but I have an unshakable faith in the power of love.

…and in the power of sweets!

(I woke up in a terrible mood and I am doing everything I can to shake it, including doodling donuts running away with hearts…)

I have been a diehard fan of Paper Source for quite a while… you can read just a few of my past adoring posts about the stationery store here, here, here, and here. Need another example to illustrate my devotion? One of my first driving adventures when I turned 16 was driving from my suburban home to the Paper Source store at the Country Club Plaza in Kansas City (which at that time seemed like a long and scary distance) to pick up swirly purple paper for a high school art project. Hobby Lobby paper would not do. I even lived across the street from that store for a while after Travis and I got married!

Recently, however, the store has been off my radar… until I browsed through the catalog that was delivered to my apartment yesterday! Of course, all of the excellent paper products were included, but man oh man, do they have some amazingly cute gift items going on right now! These are just a few of the cuties that caught my eye: 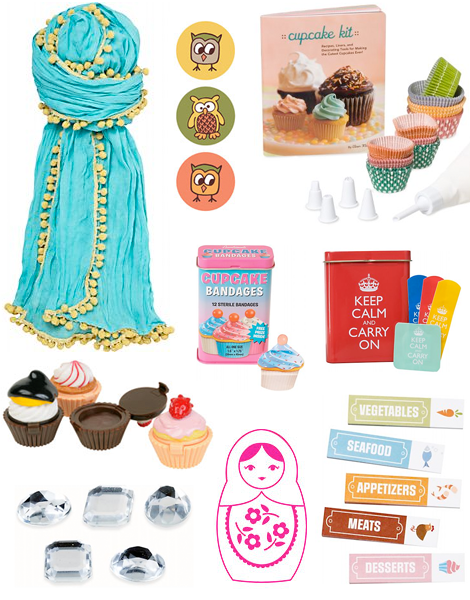 I’ve got to keep Paper Source in mind when I need gift ideas! I think you could find something cute for just about anyone there…. do you have any of their items on your wish list? 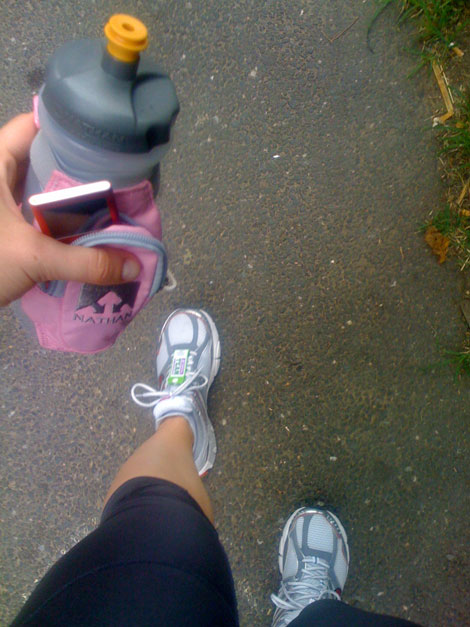 I stole the idea for this fun exercise in positivity from a really lovely blog, Calico & Co, and thought it was appropriate since this is my 30th year of life on Earth…

I ♥ candy.
I ♥ coffee.
I ♥ sunshine.
I ♥ snail mail.
I ♥ my iPhone.
I ♥ Photoshop.
I ♥ sleeping in.
I ♥ the internet.
I ♥ my husband.
I ♥ pretty paper.
I ♥ video games.
I ♥ funny people.
I ♥ art museums.
I ♥ baby animals.
I ♥ Team in Training.
I ♥ tasty sandwiches.
I ♥ pre-war buildings.
I ♥ exploring NYC on foot.
I ♥ my little chihuahua dog.
I ♥ exercising and seeing results.
I ♥ parties and party decorations.
I ♥ ultra fine point Sharpie markers.
I ♥ real, delicious, healthy, whole foods.
I ♥ cupcakes! (Really, any cute dessert.)
I ♥ finishing a task and/or reaching a goal.
I ♥ my family (extended & in-laws included).
I ♥ fantasizing about my future dream house.
I ♥ sparkling water (acqua frizzante in Italian).
I ♥ uncompromisingly friendly and optimistic attitudes.
I ♥ chatting & laughing with friends (usually at inappropriate times).

…and just one more for good measure…

I ♥ the magical universe – hey, we exist! 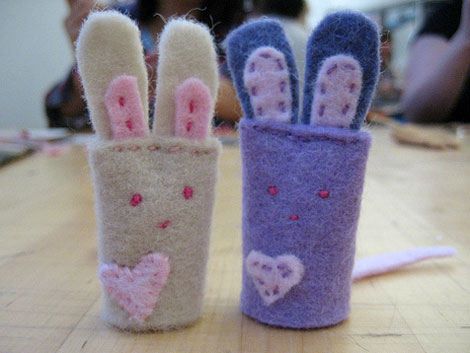 You may remember the article about Kata Golda’s Hand-Stitched Felt craft book that I wrote back in November for Craft Critique… well, Kata was back in New York City this week hosting a few more craft events. I hope she doesn’t think I am stalking her, because I attended two of her events in the span of three days! Travis was kind enough to accompany me to the NY Public Library Crafternoon on Saturday where we made the cute finger puppets seen below (Travis’ is the skinny one on the left). Then, last night I went to Etsy Craft Night where I made the little guys seen above.

I am not totally sure what I am going to do with four finger puppets, but they are so darn cute and fun to make! Plus, the felt that Kata provides for the workshops is just wonderful… I am glad I made it to both events. (Stay tuned for an upcoming article all about the NYPL Crafternoon event on Craft Critique!) 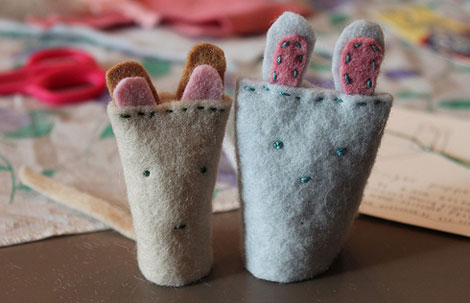 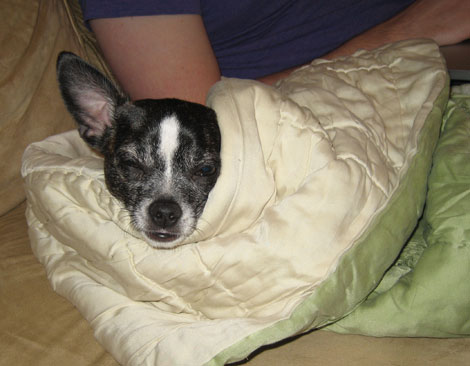 I have another installment of the NYC Cupcake Review in the works, but today I just needed a smile… so here is a cute photo of Crusher wrapped up as a burrito. Enjoy!

(I recently read a cool eBook about how to improve your blogging skills, and writing about how cute your pets are is definitely a no-no… oh, well. My blog may have to remain unimproved.)